Skip to content
Date: March 21, 2016Author: Aris Teon 0 Comments
In imperial China the family was the nucleus of social order and state ideology. Unlike its Western counterpart, the Chinese family was not simply a social unit; it was an institution that over the centuries gave rise to an ideology that permeated the lives of every individual and shaped the structure of the state.
During the Qing Dynasty, the imperial state continued the practice of strengthening the family to maintain what was considered the proper, natural order of the world. Despite having a legal system that meted out brutal punishments to offenders, the imperial government did not rely primarily on repression and coercion, but on the self-regulating power of family ideology. Through education, public rewards and ceremonies, the state strove to propagate its message and to keep society peaceful.
“Universal marriage and residence in a household based on [the] family system was the government’s goal for all the ‘people’, and that goal was aggressively promoted” (Susan L. Mann 2011

, Chapter 3). On the one hand, Chinese philosophers such as Confucius, Mencius and Xunzi had devoted much of their work to the family system. Their theories helped shape and perpetuate a family-centred worldview in Chinese thought. The order of society rested on hierarchical, yet complementary social roles which depended on gender, age, blood relations, social standing etc.

When people – both in East and West – talk about Asian “collectivism” as opposed to Western “individualism”, they actually refer to the fact that for centuries Chinese individuals were embedded in a rigid network of familial and social relations. The value of individuals as human beings depended on whether and how successfully people could fulfill their “proper” social roles as sons and daughters, husbands and wives, fathers and mothers, etc. Through the family, individuals were disciplined and made to fit into “proper” hierarchies.
On the other hand, family ideology was a perfect instrument of governance. Imperial subjects were organised in partially self-sufficient family units that worked hard to feed their members, produce clothes and all that was necessary for their well-being. By doing so, they also generated surpluses that constituted government revenues in form of taxes (ibid., chapter 1). Moreover, the family made it easier for the government to control its subjects. Through the baojia system (保甲; pinyin: bǎojiǎ), the state registered every household, the names and the number of males organised in group of tens. The household was headed by a leader who was responsible for reporting crimes and misbehaviour to the authorities (ibid.). The baojia was a system of mutual surveillance based on the family, which ensured the reinforcement of family ideology and the preservation of social order (ibid.).
There were many ways in which the state actively promoted family ideology and family virtues. For example, government officials regularly held lectures at meeting halls, temples and marketplaces in which they explained to the population official social virtues and tried to propagate social “harmony” (ibid.). Furthermore, virtuous individuals were publicly rewarded. In this way, the imperial system singled out individuals and made them feel proud of their upright and respectable conduct, and at the same time it offered to the community real paragons of moral behaviour. One of the instruments the government used to reward people was the construction of memorial arches (牌坊; pinyin: Páifāng) to celebrate the achievements of common people who had distinguished themselves through the rigorous observance of socially sanctioned ethical norms, such as filial piety.
Let us now examine a few concrete examples of how imperial subjects were rewarded through the construction of memorial arches. The first three examples are from a book by Alicia Bedwicke (aka Mrs Archibald Little), a Western woman who lived in China at the turn of the 19th and the 20th century. Mrs Little quoted the following passages from official imperial gazettes of the time. The last example is the story of a memorial arch that stands nowadays in 228 Peace Park in Taipei.

May 2nd, 1891.—The Viceroy at Canton submits an application which he has received from the elders and gentry of the district of Shun-teh, asking permission to erect a memorial arch to an old lady who has seen seven generations of her family, and is at present living under the same roof with four generations of her descendants. The lady, whose maiden name was Lin, is the mother of the distinguished General Fang Yao, and is in her eighty-second year. She has six sons, forty grandsons, one hundred and twenty-one great-grandsons, and two great-great-grandsons. Her life has been one of singular purity and simplicity, fully entitling her to the honour bestowed by law upon aged people of distinction.—Referred to the consideration of the Board of Rites.

February 6th, 1891.—Li Hung-chang submits a case of filial piety which was brought to his notice by Wu Fu-lun. An assistant deputy magistrate on the Chihli expectant list had a daughter renowned for her docile disposition and her filial piety. In the summer of the present year her father was deputed to look after some work in connection with the river embankments. While he was away, his wife became dangerously ill, and was most tenderly nursed by her daughter, who went the length of cutting off a piece of her flesh to make soup for the invalid, and who offered to give up her own life should that of her mother’s be spared. When her elder brother proposed to go and inform the father of the dangerous state of his wife’s health, she prevented his doing so by pointing out that her father had enough to do looking after his own work, and to add to his anxiety by conveying to him such news would serve but little purpose. Two days after P`eng-chu’s return his wife died, and the daughter refused to take any food for several days. Seeing by so doing she was causing great grief to her father, she forced herself to take a little gruel. Some time after he was ordered away on river-work, and during his absence she again refused to take any nourishment. While away he was taken ill, and asked for leave to return home. On his arrival he was met by his daughter, who informed him that she dared not die without first telling him, but that now he had come back she wished to state that it was her intention to go and wait on her mother in the shades below. In spite of all entreaties she then resolutely abstained from all food, and died some days after. Memorialist agrees in thinking that it would be a thousand pities to pass over such a remarkable instance of filial devotion without remark, and would ask that the Board be directed to make out a scroll to her memory.—Request granted. Let the Board of Rites take note.

January 23rd, 1891.—In 1858 Liuchou, a city in Kwangsi, fell into the hands of rebels. A great number of its inhabitants died in its defence, or, preferring death to dishonour, committed suicide rather than submit to their conquerors. Nor did the men alone show forth their bravery in this respect; their example was largely followed by the women. When the city was recaptured, orders were issued that a list should be prepared of all those who had suffered, in order that some steps might be taken to commemorate their self-sacrifice. At the time when these orders were issued, every the rebellion, and it was not easy to give effect thereto. When peace was restored, instructions, however, were again given that inquiries should be made from time to time as originally directed. Ma Pi-yao, the Governor of Kwangsi, accordingly submits a list drawn up by the Mah`ing District Magistrate of the names of thirty-four women who died in those troublesome times, and thus preserved their honour. Memorialist thinks that the memory of these women is worthy of all honour, and would suggest that the Board be instructed to prepare a posthumous testimonial of merit commemorative of their action. Thus will their pure souls be set at rest, and others be encouraged to follow in their footsteps.—Request granted. Let the Board of Rites take note (Little 1899, chapter VIII).

The Arch in Honour of A Woman From The Huang Family

One of the few architectural relics from the Qing Dynasty that remain in Taipei is the arch in honour of a woman from the Huang family (see Joseph R. Allen: Taipei. City of Displacements. Seattle / London 2012, pp. 101-102). The arch now stands in 228 Peace Park. 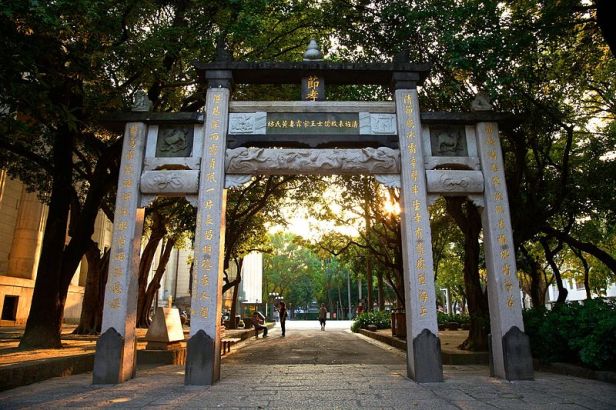 The memorial arch in honour of the woman from the Huang family (黄氏节孝坊), in Taipei’s 228 Peace Park

Born in 1820, she was a resident of Pujin, in mainland China’s Fujian province. At the age of 16 she married Wang Jialin, a 17-year-old boy from Quanzhou, also in Fujian province. The boy’s father was a government official who later resigned his post to become a merchant. He and his family moved to Taiwan and settled in Bangka. Wang Jialin was set to become an official like his father, but after failing the imperial examination several times, he gave up and joined his father’s business. However, in 1847 he died. His wife was only 28 years old. True to the female virtue of filial piety, the woman never remarried and died in 1893 – only two years before the Japanese occupied the island – at the age of 74 years.
Family hierarchy and virtues were highly regarded in Chinese society, and the imperial government actively promoted and rewarded such values. The arch in honour of the virtuous and exemplar wife and mother was erected by order of Emperor Tongzhi in 1882, close to East Gate (note). Later on the Japanese moved the arch to Taipei Park to make space for the residence of the governor-general (see Allen 2012, pp. 101-102).
If you want to support our website, you might be interested in taking a look at our translations of Chinese literature on Amazon. Currently available is ‘Craven A and other Stories’ by Mu Shiying. Thank you for your support!